An adventurer's extreme plan to spend the next three or four weeks on the Atlantic Ocean "walking" from Florida to New York in a hamster wheel-like vessel he calls his bubble, has ended in just one day after kick off..Ray "Reza" Baluchi  set out from St. Augustine, Florida on Friday and planned to make his way out to the Gulf Stream, which would help propel him up the East Coast to New York.

He said he was making the 'walk on water'  because he wanted to raise money for first responder charities. However, just a day after he started his journey, Baluchi decided he had to turn back because he was having problems with his tracking system and his backup device was missing. 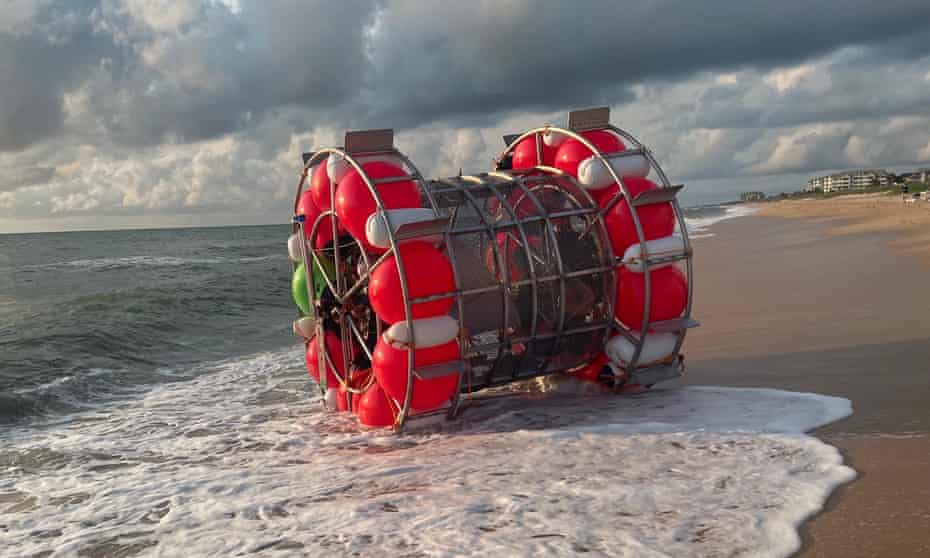 He ended up on the Palm Coast beach in Florida about 22 miles south of where he started, saying he could get new equipment in that location.He said his team was going to purchase a replacement device, so he could resume his journey, but the Coast Guard wouldn't let him. The coast guard said his voyage was too risky and he wouldn't be let to go on such mission if he didn't put the right measures in place.A US Coast Guard spokesman said it had issued a captain of the port order requiring Baluchi to have specific safety and navigation equipment, have an escort boat and file a voyage plan before he sets off again."My team is working to get me a boat," he said. "They're working on that, to get some fishing company, they're wanting to sponsor me."He said he'd rather make the trip on his own with support from his team on land."I don't want it, [it's] more exciting if nobody follows you," Baluchi said. "I don't want to spend money on a boat, I want to raise money for organizations."It's not the first time that Baluchi (who fled Iran to avoid persecution) has attempted other risky unsuccessful voyages.He tried to run from Florida to Bermuda twice in an inflatable bubble. The Coast Guard had to rescue him in 2014 and towed his bubble back to land in 2016, saying he violated their order not to embark.Baluchi said he had run across the United States twice and around its perimeter once."One thing is I want show people, you know, is if sometimes you fail, never give up your dream," he said. The post Adventurer’s plan to ‘walk on water’ for 3 weeks from Florida to New York in a floating bubble ends in just one day (photos) appeared first on Linda Ikeji Blog.

Insecurity: We are working very hard, I hope Nigerians will ......